Vintage milk floats scored a big success by thwarting developers & their supporters’ plans by rallying around to help Humphrey the campervan save Old Walter!!

Mabel, Maud & Mildred, our old milk floats, came out of retirement to support Humphrey. Rumours were that the developers would try an offensive but the brave old girls were ready and formed a rear guard blockade.

Florence, the nursery’s famous orange & white Unigate float was guarding the front approach. She geared up for a 5-mph dash to protect the trees nesting woodland birds from disturbance.

Humphrey, the eco-discombobulator, activated his popcorn flinger and Andrew juggled marshmallows to bamboozle the workmen from on top of Walter’s head. In the end the workmen were no-shows due to the publicity and presumably because even with their hard hats, they deemed failing confectionary as a‘health & safety risk’ not worth taking.

Our customers, supporters & closet eco-warriors came to support the ‘floatilla’ in their valiant efforts. The press were invited and many local news outlets contacted us for more information & photos.

Our village residents’ committee have decided, after being unable to retain promises & benefits, to now bizarrely support the developers with putting new pumps under the water tower Old Walter which will enable the developers to retain the estimated 56k demolition costs! We believe that this should go to the community or to a wildlife & conservation charity, such as the Woodland Trust or BBOWT. A freelance journalist may want to find out why?

Developers have made TEN 5/6 bedroom houses with no starter homes or affordable housing. This is on an old bowling green & sports club and is classed as ‘building in the open countryside’ and ‘unsustainable’ as there is no cycle lane/footpath for children to the nearest town. The community has to rely on cars to get to nearby schools or to the shops.

Our neighbours have given up seeing any justice so ourselves (Andrew & Lucy) along with Humphrey & the milk float girls are trying to get as much publicity as possible to shine a light on the way our community and other rural communities are treated by big developers & the planning system.

After Humphrey’s current adventures, he will be coming down to earth & is on a mission to help other villages & rural communities protect their surrounding countryside. As an aged 1970s eco-warrior he is due for an upgrade whereby he will converted to electric power & have solar panels on his roof.

Next year he will be visiting schools where he will be showing off his superpower discombobulating gadgets i.e. rotary rainbow wings, popcorn flinger, fuddle fogging machine, smelly scent-sation system (SSS), marshmallow-pult, gleeful/grumpy gramophone (GGG) to name but a few. His mission will be to inspire children to protect the environment and natural world that is currently suffering at the hands of uncaring grown-ups. 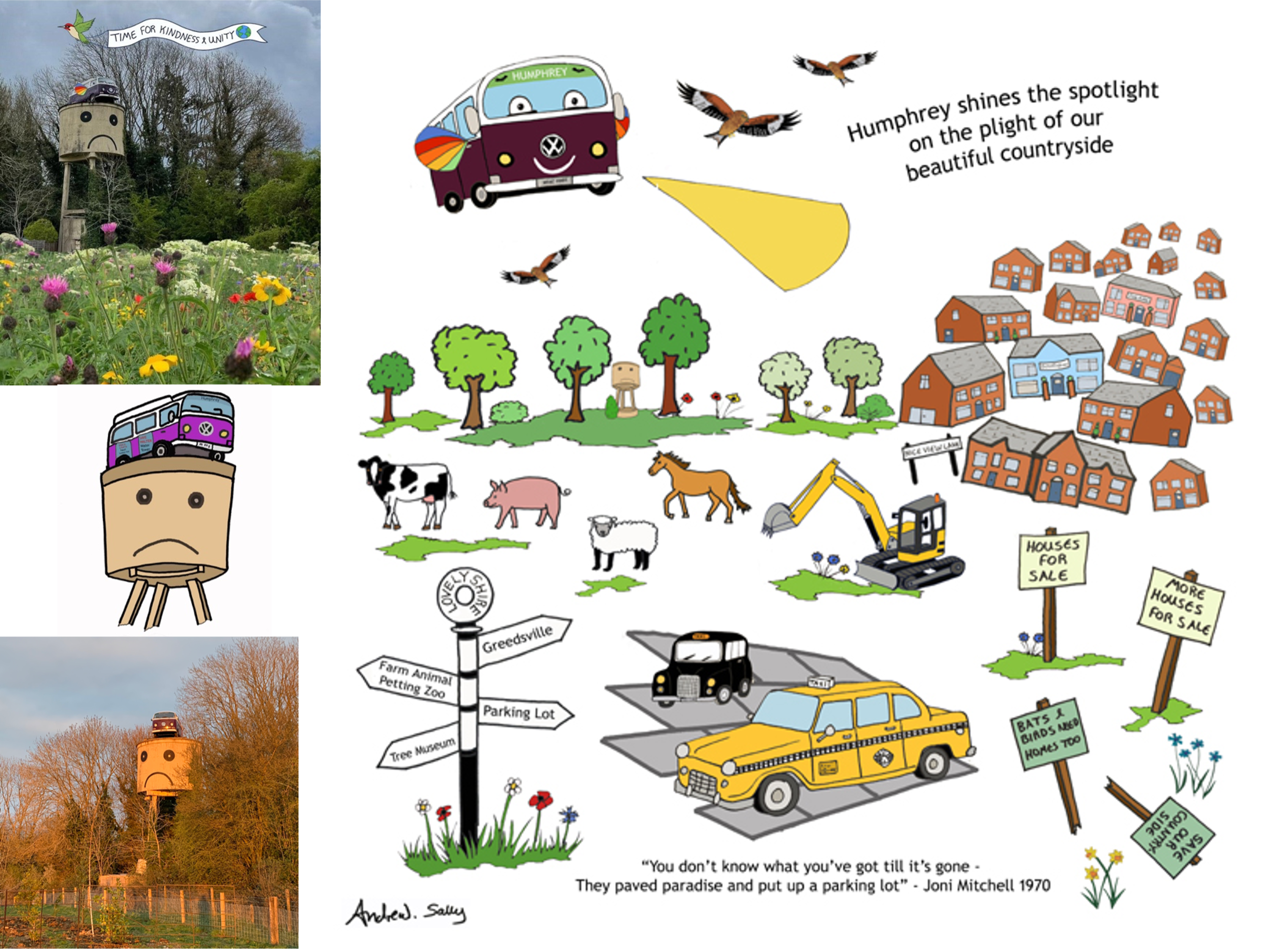