Humphrey, our family’s 1971 classic campervan has joined in to help to save Old Walter from demolishment by parking on top. It’s quite a mystery how he got up there a few days before Christmas. Some are convinced that he flew up there himself like chitty chitty bang bang but others speculate that his feathered friends & other woodland creatures helped lift him up early one morning like in a Disney film. The truth will be revealed quite soon.

Why is Humphrey supporting Old Walter?

How can Humphrey help other communities?

What are the options for Old Walter?

The Battle of Bunkers Hill

Bunkers Hill consists of a hamlet of 24 houses which were originally built for the workers of the nearby Blue Circle cement works and quarry. It is situated on the edge of the Cotswolds three miles from Woodstock and Sir Winston Churchill’s birthplace, Blenheim Palace. The idyllic rural life was soon to change when the bowling green and sports club became targets of the developers. The construction of 10 five/six-bedroom houses (no affordable houses or starter homes) was proposed. The council’s policy was to support the government directives for refusal of the subsequent planning applications due to it being classed as 'building in the open countryside'.

Many residents fought a hard battle but ultimately residents and planning officer’s wishes were overturned by elected local Councillors. In their 'wisdom', the Councillors backed the developers, believing that this rural hamlet would be improved by more houses. However, there is no cycle lane or footpath suitable for buggies etc. to the nearest town, which would mean a large community totally reliant on cars. The busy main road (B4260) is so dangerous that the young and the elderly would be taking their lives into their own hands in attempting to cross over to the existing bus unlit bus stop. This is clearly unsustainable.

Lots of offers & pledges were made to residents of Bunkers Hill in order to gain support prior to the outline planning application but most have since evaporated into thin air, i.e. new mains fed water supply to eliminate the risk of E.coli (as happened in the past with storage tanks), removal of lead pipes, an acre of recreation land for allotments and community building etc. etc.

Most villages have a group of volunteers that form the Residents Committee, not unlike the Vicar of Dibley’s. Kind hearted and well intentioned, but sadly no match for the teams of consultants and legal representatives that developers have at their disposal. In Bunkers Hill’s case, despite concerted efforts, our committee did a 'chocolate hobnob' and, alas, were unable to retain most of the benefits that were originally offered before planning was granted.

Following this, the committee and most residents became resigned to accepting the disappointing outcome. Andrew and Lucy stepped forward with Humphrey to form a last ditch attempt to use the power of the public spotlight to convince the developers that it is in everyone’s interest to act responsibly and fulfil their moral obligations.

Humphrey’s wish is not only to save his old friend Walter but also to bring these lost benefits back onto the negotiating table, and we hope that you will support our hamlet by signing our petition at the end of this page.

Why is Old Walter the fall guy?

Walter was used by the developers in proposing that his demolishment was a ‘benefit to the community’. He was described by them in four planning applications as ‘dangerous’ and ‘unstable’ and cruelly described as an ‘eyesore’. However, miraculously (in the developer's eyes) he has now made a full recovery despite his terminal ‘concrete cancer’, weak legs and leaky asbestos roof.

Walter is being used again for the benefit of the developers rather than the community, as they now intend to locate new water pumps and a storage tank underneath him, in order to avoid fulfilling their legal obligations. This would mean them avoiding the cost of constructing a new purpose-built steel building as they had agreed to do. Additionally, and more importantly, they wouldn’t have to go back to planning where lost benefits could be reinstated, such as a new water mains pipe rather than inferior and potentially problematic storage tanks. Of course they would also be able to keep the substantial estimated sum of £56,000 demolishment cost (this saving has not been offered to the community by the developers in lieu, which seems particularly unjust).

The council are still insisting that Walter is demolished, as this was put within the binding legal agreement (S106), which was agreed and signed by the developers. As you can see, poor old Walter’s days are numbered unless there is enough public support to save him with Bunkers Hill Nursery’s plan to sponsor his transition into a bat roost. Walter and the woodland are community-owned and are landlocked between the plant nursery and its wildflower meadow.

Humphrey is hoping that the council will not be persuaded by this attempt by the developers to circumnavigate the legal documents, instead to only lift the threat of demolishment when the developers offer a fair deal for Bunkers Hill community. Please contact Cherwell council planning department to support this initiative: planning@cherwell-dc.gov.uk and sign our petition.

Bunkers Hill’s tale is quite unlike any other you will have heard of. There is a twist to this particular story as by the developer’s including Walter’s demolishment within their planning applications, they are unable to occupy their houses, which are now built, until he is demolished!

The result is a three-way standoff between:

We are hoping that a compromise can be made, and an agreement that is fair and reasonable for our community can be reached. Your support will be very much appreciated.

Pressure is being put on us to remove Humphrey the camper and we can confirm that we will not be removing him anytime soon. We will be enjoying a leisurely breakfast and the sunrise over the fields from the best camping pitch in England!

Andrew and Lucy feel very strongly about the loss of our natural world and the environmental impact of climate change and habitat loss, due to human encroachment and expansion. We created our own wildflower meadow in order to further encourage native species of flora and fauna to flourish, but also to ensure that no further houses would be built on land surrounding our village.

The benefits of green spaces for well-being and mental health cannot be emphasised enough. It is for this reason that we include a crowdfunding option to raise additional funds beyond those needed to save Old Walter. It is our family’s wish to be able to set up a charitable foundation to buy additional land locally (and further afield) to continue Humphrey & Walter's initiative of kindness & unity. Together with your help this would allow us to create more wildflower meadows and woodlands for other communities to enjoy whilst also to prevent housing & industrial developments encroaching into the countryside.

We would like to work with conservation and mental health charities in a partnership whereby they can get involved with the planting and maintenance. We feel this would be of great benefit to those that sadly are suffering with depression or other mental health difficulties, bringing hope for a brighter future.

Please look at our crowdfunding page:

Actions you can take

We hope you will support Humphrey and the community in getting justice at last for Walter by taking any of these actions:

We hope that Walter’s story will inspire others to stand up for what is right and to encourage all businesses to be profitable and successful but with a little extra kindness. Conservation of our British countryside and wildlife need to be treasured and we hope that you will be as passionate as we are to preserve it wherever possible. 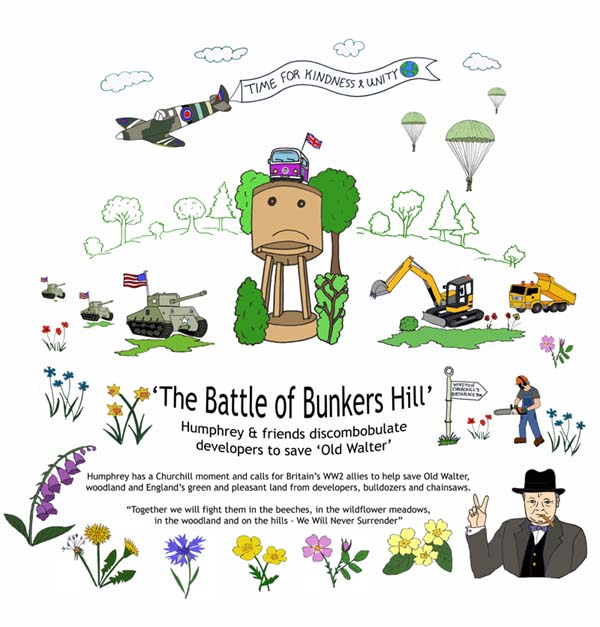 Message to America from Boris the Bat

As head bat Boris, I send my greetings across the pond to my American cousins and hope that my good friend President Joe bat will support Humphrey’s wish that now is the time for kindness and unity. Our lonely planet is facing an environmental crisis due to pollution, deforestation and habitat loss, with the human race’s expansion and unrelenting destruction of the natural world.

Wonderfully diverse and unique creatures are facing an uncertain future with countless losing their own battles for survival as mass extinction looms on the horizon. As climate change speeds up, it will become irreversible within a few short years unless all nations join together to help halt the rising global temperature and reverse the damage already done. Humphrey’s modest protest to save his friend Old Walter and surrounding woodland is small fry in comparison, but he hopes that it will be successful and will inspire many individuals and communities to stand up to ‘environmental nincompooperism’ and social injustices. If a good and just cause needs your help then ‘do a Humphrey‘ and ‘think outside the bat box’ to make a difference. Don’t leave it to someone else or give up when others say “it’s not possible”.

The UK is hosting the 2021 Climate Change Conference in November, a pivotal moment and possibly one of the last chances for our planet’s future long-term health. America and Britain’s long-term friendship and resolve to work together by doing what is needed and right, will set an example to win the world’s biggest challenge, with kindness and unity.

A bit about Humphrey by Andrew and Lucy

Humphrey the Happy Camper is the beloved vintage VW campervan belonging to the nursery family. He was born in 1971, and has travelled up and down the British Isles for holidays and adventures. Recently he toured Scotland and completed the North West 500, where he heroically climbed and descended the hair-raising Bealach na Bar mountain pass. He is loyal, courteous and polite and is always willing to give way to oncoming traffic with a toot-toot of his old-fashioned horn.

Despite his cheerful and easygoing personality, he can be rather stubborn at times. He especially dislikes rudeness, bullies and bad manners. Nincompoops who pollute and discard litter and industrial waste, as well as anyone who is unkind to nature and animals, make him particularly grumpy. Then instead of being ‘Humphrey the Happy Camper’ he transforms into ‘Humphrey the Eco-Discombobulamobile’, or Discombobulator for short.

He has all manor of hidden devices at his disposal which come into action at a flick of a switch. His greatest ability is being able to fly! Rather like an oversized bumble bee, his rotary rainbow wings allow him to defy the laws of physics and gravity.

Humphrey’s early life is a bit of a mystery but he is thought to have been once owned by Wallace & Gromit. He’s a fantastical conglomeration of other super hero automobiles including Herbie, Chitty Chitty Bang Bang, Wacky Races Convert-a-car and the Batmobile.

Humphrey’s adventures are inspired by Roald Dahl’s tales of fairness and moral comeuppancing. Humphrey is also proud of his efforts to preserve the British countryside, heritage, generosity and values which we often take for granted, but that American born Britons such as Bill Bryson have so enthusiastically promoted and treasured. Humphrey’s latest adventure is also influenced by another American ex-pat, Bill Heine, with his famous Headington Shark that challenged the planning process.

Thank you for taking the time to read and hopefully support our campaign to save Old Walter, and preserve our local woodland and wildlife. We hope you appreciate our eccentric and humorous approach to what are serious issues of a local, national and world level. Anyone can ‘do a Humphrey’ and discombobulate the environmental and social nincompoops who make the wrong decisions and policies. Why not give it a go! Now is the time for kindness and unity.